We are now living in Mareeba, having travelled all over Australia while working on-line from about 2005 – 2010 with our daughter who was born in 2004.

We then lived in Cape York from 2010 – 2014, care-taking the Portland Roads Beach Shack holiday accommodation – we arrived in September 2010 just in time for the build up to the wet.

We were living on a hill, in an open house, overlooking a beach with magnificent views of the Coral Sea AND mangroves, a breeding ground for sandflies. 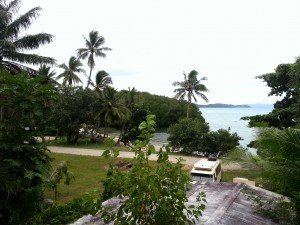 We found that DEET products were the only readily available repellants that deterred the sandflies. Our tropical adventure was not being ruined by crocodiles or pythons but rather by these tiny, almost invisible flies. I (Cate) particularly wanted to be rid of this blight as I have a bad reaction, I was incredibly itchy with some bites turning into large blisters (even when I didn’t scratch – I promise!). Of course we didn’t want to be bitten by mozzies either, especially with the chance of Ross River and Dengue Fever.

We were not comfortable applying DEET every morning and evening, especially on our young daughter. So we went in search of a natural repellant on the internet and were greatly relieved to find Mosi-guard.

We were sceptical about a natural product being as effective as DEET. We had tried natural products before and found that they were useless as soon as you went anywhere the least remote. We were not expecting them to be a match for the hungry bloodthirsty mozzies and sandflies of the tropics. We had also experienced vicious sandflies while staying on Dampier Peninsular, North of Broome, Western Australia.

We were amazed at how effective Mosi-guard was. Not only does it repel the biting insects, but it also feels nice on the skin and relieves the itch of existing bites. We found with the usual repellants they did work but your skin would become vulnerable to a new attack when you scratch existing bites, or even sweat.

We used Mosiguard religiously twice a day for the 4 years we were living at Portland Roads Beach Shack, and found it extremely effective against sandflies and mosquitos. Our shack had no mosquito netting and open doors and windows, but Mosiguard was the best protection against the insects.

After finding it difficult to purchase from this remote location, we decided to set up our own online shop. With our past experience in retail and current experience setting up many online shops for others we decided to set up a shop for ourselves, this goes with our vision to spread information on ways to travel long term for little money and sustainably. See www.moretravelforless.com

Thanks Cate, Seamus and Zoe

You can find us on google+