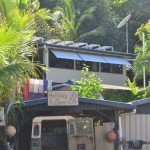 Sandflies (as we know them in Australia) are actually Biting Midges and are members of the insect family Culiocoides. Over 270 species of Culiocoides occur  in Australia but only three main species cause havoc and itchiness in humans.

Their habitats are  mangrove swamps and tidal flats, coastal lagoons and estuaries. They don’t like wind very much so calm still days are the worst, although if a light wind is coming from the direction of their habitat, we have found they still bite.

The Byron Shire council has a good article on their website about “Why are biting midge bites so unpleasant?”

“The anatomy of their feeding mechanism means that (unlike mosquitoes) they leave a large raised mark on the skin that is filled with damaged tissue and saliva (containing anticoagulants). This can cause certain individuals repeatedly exposed to their bites to become ‘sensitised’ and trigger allergic responses. The direct impact on human health and wellbeing caused by midges is due to the allergens in midge saliva. These biting insects are an annoyance to humans, but are not likely to transmit disease.”

Sandflies do tend to attack arms and legs more than bodies, so protecting these works well. 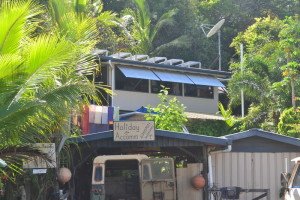 We lived in Cape York at sandfly heaven for 4 years. While there we covered feet, legs, hands and arms with Mosiguard early in the morning and about 3 in the afternoon

Anti-histamines do help with people who get allergic reactions to sandfly bites (but you should get your doctors opinion before you do this).