You are here: Home / Archives for lemon eucalyptus oil 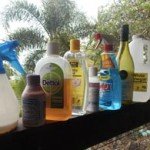 Firstly, we use and sell, Mosi-guard which is a natural insect repellent that has been scientifically proven to be more effective than the potent chemical repellants available, and yet it is all natural and safe — even for small children. Mosiguard works against Mosquitoes, Sandflies (Midges), Ticks and Leeches. Please find more information on the MosiGuard developers website.

You can buy Mosiguard here

Now to our other discoveries:

Sitting at the drag races in the small town of Tom Price, in the Pilbara, we were being eaten alive by ferocious mozzies.

A neighbour told us about Windex, at the time we were keeping Windex in the vehicle all the time for when the red dust turned to mud on the windscreen, so we were rapt to find out that it was an excellent way to neutralise the toxin from those insect bites (including March flies).

The march flies were particularly vicious, and if you reacted (as I did) you could get a wildly itchy patch some 8cm across.

I had never heard of or experienced that before, where I come from march flies leave a bite not much worse than a mozzie.

So we were covered in bites, applied the Windex liberally, the toxin was gone, no worries – hardly any bites the next day.

This is great in an emergency. I discovered deodorant on a trip to Sumatra, Indonesia. It seems to have some power to neutralise the bites, but mainly it stops the itch by sealing the bite from exposure to the air

Aah the wonders of vinegar – not only is it a powerful mould killer, cleaner, neutraliser of jelly fish poison and fabric softener but vinegar is an excellent neutraliser of biting insect toxins. It is great for mozzies, sandflies, March flies- the March fly bites will sting for a second as they actually give you a little cut, but it is worth it if you react badly (my bites last for days).

Yes, good old wine. On my first night in Kuranda near Cairns, on the way to a house sit I was staying at a nice Bali style resort. Sitting at the poolside restaurant I was spiked by a hairy caterpillar; it was tiny, just about 15mm long I flicked it away but immediately came up in big red, extremely itchy welts where ever it had landed on me. I asked the waiter if they had anything to put on it or knew what to do. His eyes went wide and he hurried off to see what he could find, never to return. My instinct was to grab for the vinegar but since I didn’t think they would appreciate me breaking into the kitchen I just dipped my finger into the wine, and spread it over the welts. It worked a treat! The marks were gone the next day. Later I heard from the locals that these hairy caterpillars left little spikes in you that itched for weeks, so I counted myself very lucky that I had neutralised the toxin before it got a chance to take hold.

This shouldn’t be little known – not much is going to bite through clothing, though they will go under and around. Your average weight material will protect you from mozzies, but even thin material will protect you from sandflies and less vicious mozzies while having the added bonus of reducing sunburn. I like that light indian cotton such as the kurta shirt for coolness and some protection, particularly at dawn and dusk. I am no scientist but I don’t get why you would need to impregnate cloth with insect repellent when the cloth forms a physical barrier anyway, and I notice that the fine print says that you still need to use repellent on exposed bits! If it is hot you want to use insect repellent so that you can expose bits and cool off! On that vein I don’t get SPF clothing, unless your shirt is as thin as these kurta’s it will shield you from the sun anyway! Aka Slip Slop Slap!

I don’t find it enough by itself but those less allergic than me are convinced that the fan over the bed is enough to keep the sandflies at bay.

When I arrived in the tropics the locals advised us to use baby oil, since we would be living in the open air – our houses don’t have glass on the windows, or even fly screens, this is because you need to let as much air flow through as possible, to cool you down and to stop everything from going mouldy in the went season. This does stop the sandflies by creating a physical barrier that they can’t bite through, though it only lasts an hour or so as it soaks in or is diluted by sweat, I also found that it was hard not to wipe it off, especially if I already had bites that cried out to be scratched, adding lavender or tea tree oil helped, as a repellent and to sooth the existing bites. Though I did feel pretty yuk covered in oil.

If you do a search on the web for sandfly or midge repellents you will come up with Avon Skin-so-soft, I haven’t tried it but have read many glowing reviews, stories of use by UK Special Forces. It seems it works on the same principle as baby oil, providing an oily coating to the skin that the sandfly or midge urine does not penetrate. I also read scientific studies that showed that it was less effective than most other products, and a comment on an expat forum commenting that the midges over here were a completely different entity to those that our British counterparts were dealing with.

Well, when I was a kid it was not ‘little known’ it was ‘the thing to use’ everybody had Calamine in the cupboard. It is still amazingly effective stuff, even if a bit embarrassing to go out in public showing off white/pink blobs that yell – Hey! I am new in town! Still if I am staying in, I love the stuff, dab it on thickly to form a seal, this is what gave me the idea for the deodorant in Sumatra. I don’t think it neutralises the toxin as well as some of the others though.

Great for neutralising the toxin, soothing the bites, and gives some protection as a repellent. The thing about sandflies is that you have to have repellent on every inch, they are not deterred by just the smell of it as mozzies are. It is great for mould as well. Locals at Kuranda, the mould capital, say that bleach doesn’t kill off the spores but Tea Tree, Vinegar and Clove oil do, they are kinder to fabric too.

We had a gig house-sitting a lavender farm in Queensland with a horse and 2 chooks. They put us onto lavender oil for bites. We didn’t have to worry about sandflies but lavender oil is great for neutralising and soothing mozzie bites. Here in the tropics I did try it with the baby oil and found it gave it a boost as a repellent and soothed my bites as well. Lavender is a hardy plant that you can grow around your home to keep the blighters at bay.

This works for sandflies, as the toxin is in the urine they leave on your skin you can wash it off. I find if I feel some bites before I have put repellent on, if I have a shower as soon as I can it reduces the number and severity of the bites.

Since arriving in the tropics and trying so many different products, including the mainstream insecticides we have found what we were looking for!

If you have been bitten, this product is amazing at neutralising the toxin and relieving the itch – it is a combination of natural rainforest oils and sea salt made in Kuranda, near Cairns Qld.

Now this is the most amazing product; when I lived the easy life in southern NSW and Canberra natural insect repellants were my preferred option, they worked fine for me. But once I left the safety of civilised society and took off to explore wild and wonderful horizons, the insects just got desperately persistent they were not to be deterred! At one of our first stops the insects were so persistent that even with commercial tropical strength repellant dabbed on my face and surface spray on my hat they hovered just inches away waiting for any chance.

We found Mosi Guard on the net, we had trouble finding a retailer, we did find one that had a couple they had forgotten about and bought a couple to try, we were amazed. It was everything the manufacturers website said it was. It was at least as effective than the DEET products at repelling the biting insects, but at the same time it soothed the bites and neutralised the toxins! So unlike the mainstream insect repellents you don’t rub it off scratching at your bites, even if you do rub or scratch or sweat it doesn’t just sit on the surface of your skin so it isn’t such a drama, and it is so nice to use on your skin, it smells lovely and fresh – of lemon eucalyptus, not chemicals and perfumes. So we bought a box of 12.

Our neighbours came to call, they have lived in this area for years, we gave them some Mosi Guard to try and were amazed as well, they came back the next day to buy some off us.

The same story with another set of neighbours.

So we decided to start selling it ourselves, we had been looking for products to sell online that are useful to people travelling in remote places as we do.

# They neutralise the toxin – apply immediately you have been bitten

~ They relieve the itch – apply after the bites have developed